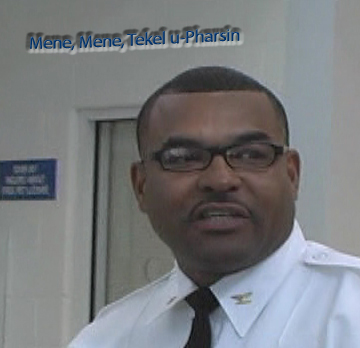 Is On The Wall

In this era in which there is increasing demand for transparency and accountability, it is becoming more difficult to hide poor performance. One glaring case in which well documented failure is becoming obvious is Rodney Taylor, the Administrator of the Prince George's County Animal Management Division. Here is a brief recap.

When we asked him to explain why it was illegal, he cited three sections of the law. He lied. Those sections do not apply to our program.

When we pointed out that it was unconstitutional enforcement of the county Animal Control Statute to attribute ownership to county residents that feed animals that can not legally be owned, he responded that "If you feed it, you own it." He lied. Residents do NOT become owners because of feeding.

Over the past 14 years, thousands of Good Samaritans have received bogus charges, and had fines of a thousand dollars or more levied against them due to the unconstitutional enforcement of the statute.

When PGFF filed suit against Prince George's County because of Rodney Taylor's continued unconstitutional enforcement of the statute, he responded by posting on the county's official website that the case had been dismissed and AMD's practice of attributing ownership to feeders had been vindicated. He lied. The judge's ruling agreed with PGFF. Residents do not become owners merely by feeding.

Residents of Prince George's County expect that county officials will be honest in the execution of their duties. They should be able to expect representatives of the government to be truthful. Rodney Taylor continues to lie, even after losing the case, and in spite of the judge's ruling. He continues to misinform residents that they are responsible as owners for animals that they feed.

The then-Director of the Department of Environmental Resources, Mr. Charles W. Wilson, assigned Rodney Taylor the task of having the Spay/Neuter Clinic in the new Animal Services Facility open on July 1, 2009, when AMD moved into the building. In spite of the fact that PGFF provided a reference to a clinic operator who would do it at no cost to the county, Rodney Taylor failed to do so, lying again, blaming a lack of budgetary allocation. It was that same clinic operator who was finally allowed to open the clinic when Rodney Taylor finally completed the assignment two years behind schedule.

After learning about the poor performance of the Animal Management Division under Rodney Taylor, Mr. Wilson announced, in November 2009, a set of policy changes to improve outcomes. It was a "New Philosophy" which would be virtually a "New Day" for Animal Management in the County. This was a comprehensive approach which included shelter reform, community outreach, expanded adoption programs, foster care, rehabilitation programs, and humane care for all animals.

In an interview with the press, Rodney Taylor contradicted his superior and said "I wouldn't call it a 'New Philosophy'."

Mr. Wilson provided training, both on-site and at a two-day conference in D.C. during the summer of 2010. Due to his persistence, the outcomes improved modestly during 2010, in spite of the resistance of Rodney Taylor.

Mr. Wilson made many attempts to improve outcomes and thereby save lives. These were all ignored by Rodney Taylor. Attempts to deal with the insubordination were thwarted because of the cronyism in the corrupt Jack Johnson administration.

In June 2010, County Executive Candidate Rushern Baker attended the PGFF Candidate Forum. He stated that he was aware of Mr. Wilson's policy announcement and agreed with it. He recognized that other jurisdictions were doing better than we were, and that we needed to improve. When asked if he would be willing to make personnel changes to improve outcomes, he said that the most important thing was to "get the right people working at the shelter". So far, he has taken no action to accomplish this.

A historic record was set in June 2011 when nearly a thousand animals were killed at the facility. This was the highest number of animals killed in any single month.

The record slaughter in June 2011 and the petition that we circulated afterward, gave rise to a flurry of about a thousand letters and email messages to the County Executive's Office, articles in local newspapers, radio interviews, letters to the editor -- all calling for the change that had been promised by Candidate Baker a year before.

The CountyStat Confirmation -- Worst On All Counts

County Executive Baker established the CountyStat Team to examine agencies and programs of the government and improve effectiveness, transparency and accountability. In September 2011, as a result of the public outcry, "Euthanasia" at the Animal Management Division was the first issue considered by the team. In their presentation, pages 16 and 18, they compared our AMD with three other jurisdictions, over a period of three years, and found that AMD was the worst, or nearly so, in every category, in every year, in both kill rate and adoptions.

At a CountyStat worksession, it was observed that the outcome data indicated that there was declining performance. The reply was, "We have the data, but we don't use it for decision-making purposes."

Approximately 12,000 animals have been unnecessarily killed at AMD in the two years since County Executive Baker's inauguration. It has been more than a year since his own CountyStat Team documented Rodney Taylor's failure to perform.

Can't Do Better? Hide It.

Facing the embarassment of the publication of statistics which documented his failure, Rodney Taylor decided to "cook the books". He began labeling all feral cats as "unhealthy/untreatable" to justify killing them, in spite of the fact that "feral" is not a disease. Never mind that it seems unreasonable that an animal would be received in "healthy/active" condition, but then require "euthanasia" -- all on the same day!

Rodney Taylor then began to withhold the number of animals killed which were feral cats or Pit Bulls, the two most controversial groups of animals, and which demonstrate his ineffectiveness. It seems that the lives of these animals simply do not count.

This still left a large number of healthy animals that were being killed. In order to deflect responsibility for his failure to improve the adoption rate, Rodney Taylor decided to shift the blame to Prince George's County residents by labeling them "No Public Interest".

Once again, Rodney Taylor lied. In 2009, for example, there were 322 thousand households in the county, giving homes to 433 thousand pets. Considering the lifespan of those pets, 32 thousand die every year. Thirty-two thousand pets were needed simply to replace those who died.

In 2009, AMD took in only 8044 animals that were available for adoption. If ALL of those animals had been adopted, AMD would have met only about 25% of the demand.

There is excess demand for pets, but because of the incompetence of Rodney Taylor, AMD adopted only 1128 animals in 2009 -- only 3.5% of the 32 thousand demanded by county residents.

A Call for Action

Your support for our last petition is appreciated. Thank you. It was instrumental in getting Animal Management Division on the CountyStat Team's radar. The CountyStat analysis of AMD proved that what we had been saying about the incompetence of Rodney Taylor was absolutely true. It proved that it was absolutely necessary to "get the right people working at the shelter". County Executive Baker knows that it will be necessary to remove Rodney Taylor in order to improve the outcomes of AMD.

Since the inauguration of County Executive Baker, two years ago, about 6,000 animals have been needlessly killed each year in the Prince George's county Animal Management Facility. The county's own data shows that the rate of killing is increasing. It is time to end the policies of cronyism and political favoritism of the previous corrupt administration.

Now it is time for US to demand action. Our tax dollars are paying the salary of County employees. County residents have the right to demand that a county employee who is dishonest, insubordinate, and incompetent be removed from the position. This is especially true when the employee is caught levying fines against law-abiding Good Samaritans, and killing healthy, adoptable animals, while doing nothing to improve performance.

The Writing is on the Wall

After 14 years of dishonesty, insubordination, and incompetence, the facts have been made known, weighed on the scales of public opinion and the CountyStat Team, and like Belshazzar, Rodney Taylor has been found wanting.

Please click below to sign the petition to "Remove the Dishonest, Insubordinate, and Incompetent Rodney Taylor from Animal Management". Then forward this message to those that you know would prefer to see animals saved, rather than killed, at the Prince George's County Animal Services Facility.

County Executive Baker and his deputy can also be reached as follows:

Timothy W. Saffell is President of Prince George's Feral Friends, SPCA, PO Box 1036, Bowie, MD 20718
He is also the producer of Compassion Watch TV, available on the internet at www.CompassionWatch.org .

Prince Georges Feral Friends, SPCA is a non-profit 501(c)(3) charitable organization, working to protect the people and animals of Prince George's County. It is supported by donations from individuals. Donations are tax-deductible.

Click on the icon to see some options.
Thank you, very much!